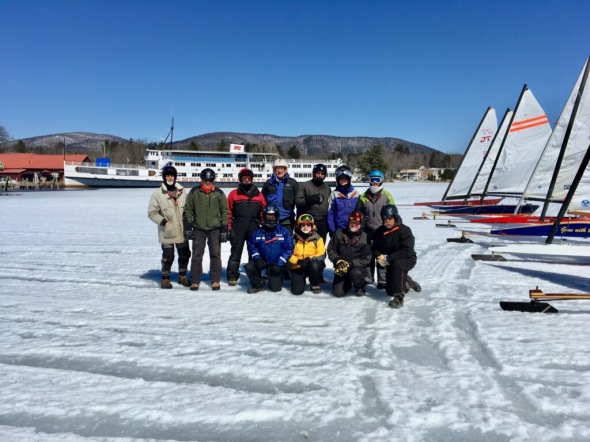 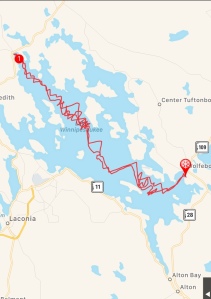 A fleet of ten boats made the journey. Lake had not been scouted until Monday afternoon although some reports from the kite wings sailors had looked very favorable.

Staging took place at Brewster Beach and, with a few hustles, boats and sailors were ready for a 10:00hrs. launch. Weather brought bright sunshine and winds about 12 mph, with temperatures hovering around the upper 20s. Ice was hard snow surface with good substance underneath.

After clearing the bay, there were large areas of good grey ice through the Broads. As you approached 5 mile island it became snow ice again and quite rough into center harbor. A few small ridges needed crossing but had many spots to do so. Only one caused concern as there were spots of open water along it. This was off of Welch island and went across the lake. A safe crossing was marked. This was used as the second check point with Parker island being the first. Long runs between tacks allowed for viewing the beautiful hills around.

Third checkpoint at 5 mile island came up one boat short. A quick scouting party found Roger with a sail down. Repair rescue team of Lee, Karin, Kate, and Eben had a quick fix of a parted stay and they were on the way again.

Arrival at Center Harbor was at 1200 hrs with the repair crew combing in about 15 minutes later. Snacks and chit chat with the obligatory stepping on land occurred around the melting shoreline. Looking for a local to photograph the entire group, Kate just happened upon the director for Center Harbor Parks and Rec. We did get a mention and picture on their website, http://www.centerharbornh.org, and I believe something will show in the local Merideth paper. Always good for PR.

Leaving with a NW wind still at about 12 mph, or 10 knts if you like, we headed out. 5 Mile island was used as a checkpoint of the way back as well. Surface was getting a little soft and winds began to ease a little, putting the fear of a long walk into out hearts. Fear not though as we got back onto good ice and away from land tremendous cruising was had. Regrouping at the marked crossing showed everyone in good spirits with all gear well. A generous afternoon of , “frolicking” occurred while the broads were crisscrossed numerous times. Final boats made it in about 1600 hrs. with congrats and fluid replacement occurring.