Lake Winnipesaukee had been resurfaced with the large amount of rain received earlier in the week and the cold temperatures launched a scouting trip on Thursday, 1/25/18. 4 boats set up but only two made it into the broads using storm sails. The scouting trip made it near the high point of the last attempt a week earlier beyond the north end of Rattlesnake Island. I was deemed a GO and word went out for the next day try as winds were predicted drop and temperatures to warm for the weekend. As the local set up for the day more and more started showing. A skippers’ meeting was called at 0945 and the details outlined. As a final check of boats, safety gear, provisions and the projected route were completed the fleet of a variety type of craft cast off at 1015.

Temperatures were in the high teens as we started and rose through the day to near 30 at the end with constant sun.

Winds mostly from the north west and starting about 10-12 mph, predicted to drop in the afternoon.

Wolfeboro Bay was rough due to weekend traffic through the snow, as ice fishermen use this as a major entrance point to the lake. Once out of the bay, there were many, “snow bubbles”. These are spots where the snow was higher than the surrounding ice when the rains came. The tops had a thin layer of ice that the runner would break through and then drop 2 or 3 inches through the remaining snow until it hit solid ice below. Obviously this would slow you down and sometimes make it rough to go in the lighter winds. 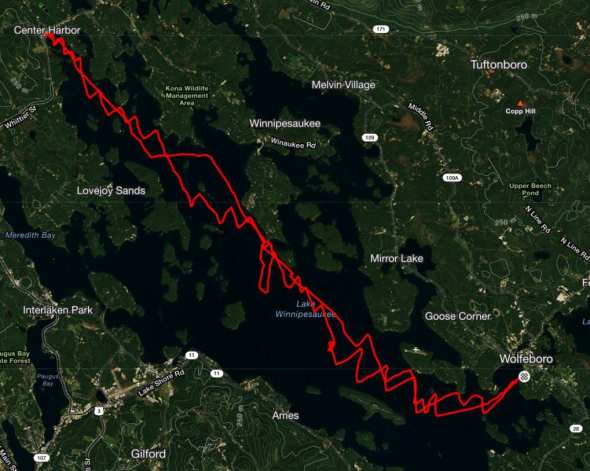 First checkpoint was off Parker Island. Everything seemed solid so we continued into the Broads where there was a nice plate of ice, grade 7-8 where you could really play. We didn’t linger due to the predicted wind drop.

Second checkpoint was up the lake near the north end of the broads. Someone had made a small snow castle visible for quite a ways. This allowed for a magnificent view of the surrounding countryside from Mount Major to Gunstock ski area to the bright white snow capped peak of Mount Washington, the hill not the boat. Everything was solid so on we went.

The only ridge encountered was from Welch Island across the lake to Long Island. We agreed to meet on the east end and sail along for a crossing. An easy spot was pushed through and all proceeded northwest toward Six Mile Island. You can use two cleared fields on the hill as landmarks to shoot for. This was another area of the bubble ice.

At Six mile you could see the Mount Washington in its winter home. Easy to work your way through some narrows between the islands and to the halfway point. Arrival time was about 12:15 hrs. A leisurely lunch was had and then a lineup for photos. A freelance pro photographer just happened to be around and constantly was taking shots. I know some of the sailors got he website. I’ll try to find it and pass it on.

At about 13:00 hrs the group set off for the run back. The wind had dropped and a couple of boats fell a little behind. A sweep was assigned to be sure everyone would be partnered to make it back. Since the the route was known the only scheduled checkpoint was at the pressure ridge. The new spot was a little rougher so all helped back the boats over and then on through the broads with falling winds and rising temperatures.

Eight of the fleet was back in Wolfeboro around 15:00 with the last two doing a little leg work to call it a day.

GET POSTS DIRECTLY TO YOUR INBOX

Check out the NEIYA Logo Gear