Iceboating & NEIYA In The News

I am very happy to announce that the NEIYA picked up coverage in the Jan/Feb issue of Windcheck Sailing Magazine.  And we even got the cover!

Thanks to T for authoring the piece along with Bill Converse, Mike Acebo, Cathy Firmbach and Joe Stanton (cover) via Deb Whitehorse for contributing last minute pictures. Note, the cover shot was incorrectly attributed to me and not Joe Stanton, not a known relative.

Please visit Windcheck http://www.windcheckmagazine.com/winter_the_most_exciting_sailing_season for the properly formatted article and sign up for their newsletter and or leave some comments below. Let them know we are out here as we want to be sure they will help promote our great sport in the future.

I am hearing that Big AF Zamboni rolling over every local body of water ready to lay bear the product of many sub freezing days and nights. See you on the ice.

Winter: The Most Exciting Sailing Season

Get hooked on iceboating!

We all love the summer sailing season, that’s for sure. Spring and fall aren’t bad, either. A nice leisurely sail is good, a fast reach is even better, and for some of us a blazing run in big breeze with the kite up and spray flying is the ultimate. But what to do when winter arrives and you crave yet more speed and more sailing? How to get the fix when the snow is on the ground and the boat is on the hard? Good news is you can fix both problems by going iceboating! 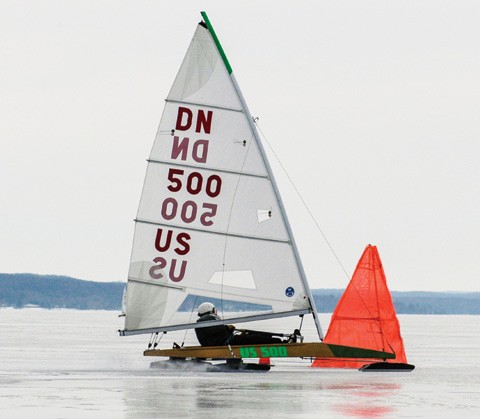 The 12-foot DN is the world’s most popular iceboat.   © Cathy Firmbach

You’ve seen the pictures, you’ve heard some stories…Legends and myths about sailors flying down the Hudson River, passing the high speed trains along the riverbank…South Bay Scooters out on Long Island jumping over cracks and gaps in the ice to rescue stranded hunters and fishermen…Hardcore racers driving all over the continent looking for a regatta site…Sailors venturing deep into the heart of Russia to carve tracks into a frozen Lake Baikal…Well, mostly they are true but there is plenty of speed and fun to be had closer to home as well!

Here in New England, the hard-water sailing season gets going between Christmas and New Years, usually on lakes in central Massachusetts and northern Connecticut. Those of us further north find ice in Maine and just over the border in Canada. Later in the season, big ice can be found all over the area as the large lakes cool off and freeze over. 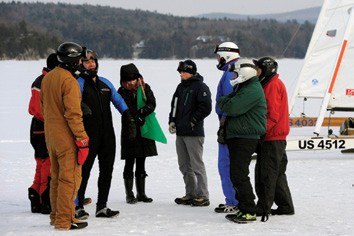 Boats are prepped, hauled out of garages and, once the ice is deemed safe, sailed across it at speeds most soft water sailors never dream of and sometimes refuse to believe! There is no thrill like it – unlike a soft water boat, iceboats have almost no drag to contend with so the acceleration is quick and the top end is waaaaay up there. Speed moves the apparent wind forward and increases the velocity and makes the boat go faster and faster. Nothing like going 25 knots in 5 knots of breeze! 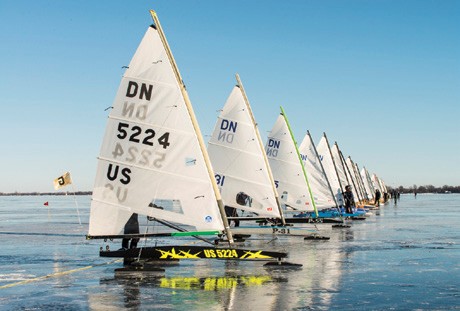 DN racers line up for a start.   © Cathy Firmbach

There are many types of hard-water craft of all shapes and sizes: Single seaters, two-seaters, cruising boats, racing boats, antiques, wood, metal, cheap, pricey…Something for everyone! They all involve some sort of frame or fuselage, a set of three runners (or “skates” as we say in New England), a plank or crossbeam to mount skates on, and of course a mast and sail. For the budget-conscious there is the CheapSkate, basically a frame built from 2 X 4s with a Sunfish rig and cut up bed frames for skates. At the other end of the spectrum is the E-Class Skeeter. Picture an F-15 fighter plane with a mast and sail and you get the idea.

In between there are several other designs to choose from: Smaller Skeeters, Lockley Skimmers, Whizzes, the ubiquitous DN class, and the Ice Opti for the kids, which is basically a shrunk-down DN with an Optimist rig. Any one of them has a knots-per-dollar ratio that far exceeds any soft water boat you can think of!

Any of these will get you whooping and hollering during a fast cruise around the lake. If you want to race (or if you are looking for a good starter boat) the DN Class is the way to go. The boats are about 12 feet long, easily car-topped or trailered, and relatively cheap. They can be tuned to accommodate a wide range of skipper weights and sailing styles. There are plenty of used DNs and gear available, as well as an active class association and a great regatta circuit, and even a mentoring program for new sailors. There are local, regional, national and world championships every year, so you can compete at a variety of events. At the big regattas there is always a Gold and Silver and often a Bronze fleet, so there is good racing for all skill levels. No matter what, the racing is fast and beyond exciting! 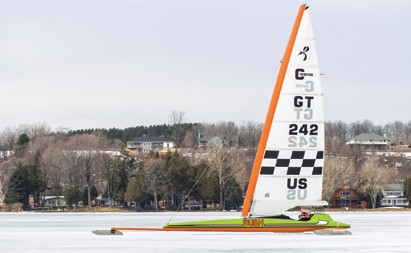 Iceboats like this C-Skeeter can achieve speeds that many soft water sailors might not believe.   © Cathy Firmbach

Whatever avenue you decide to pursue this winter you will have a blast! It’s easy to get involved, and the best way to do it is to join the New England Ice Yacht Association (NEIYA) and sail or race with us. Iceboating with other people is safer than iceboating alone, a great way to learn, and much more fun! On the NEIYA website, (theneiya.org), you’ll find information about getting started, a schedule of regattas, cruises, rallies, clinics and other events, reports of ice conditions, iceboats and gear for sale in the Ice Classifieds, and more.

Interested people are encouraged to reach out via the forum at theneiya.org or NEIYA Vice Commodore John Stanton at John@neiya.org or are welcome to stop by Landfall in Stamford, CT to learn more. Landfall stocks the hardware or running rigging for any class of iceboat. Look to Facebook for when John’s DN will be set up in the parking lot. Hope to see you on the ice this winter…and as we in the hard-water crowd say, THINK ICE!

James “T” Thieler has been iceboating for 20 years and competes in the DN one-design class both in the U.S. and throughout Europe. “T” as he is known to his friends (and anyone that’s an iceboater is his friend) currently holds the position of Commodore in the New England Ice Yacht Association. The NEIYA is a paper club with approximately 250 members who reside and sail primarily within the six New England States plus New York and New Jersey. The NEIYA’s main goal is to promote the sport of ice boating through both racing and cruising.