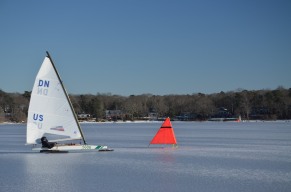 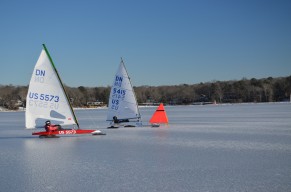 More pictures from Jeff Soderholm here https://drive.google.com/drive/folders/196ntyvhOFKA114wvH7qYiVcY7ZfAUIPd?usp=sharing  AND more from Emily Babbitt here https://photos.app.goo.gl/ZRAtyiDpJziWOWDI2 Please do not share without giving credit. It’s the right thing to do especially since they went to a lot of effort standing around in the cold. We salute our photographers and race committee making this possible.

The weather picture was crazy. An Arctic blast hit the area which is great for making ice but also great for freezing pipes, locking cars up, and keeping people house-bound in general. Oh yeah, and we also had tons of snow and big snowdrifts all over New England. Not too promising for iceboating…

I think one of the only people who had any hope of sailing over the weekend was our intrepid Regatta Chairman Steve “Mad Dog” Madden, who has been scouring the area for ice like a maniac!

He found sail-able conditions in Ashumet Pond in Falmouth, MA. Not just sail-able but pretty good! Temps went up enough to sail and even though the breeze was light and shifty we got five races in and the 2018 Doc Fellows is in the books.

Racing required patience! The breeze would come and go, sometimes you had the puff and sometimes you’d get parked. Deciding whether to run or sail, to sheet in tight or ease out and let the boat run or even just coast along was an ongoing process!

Thanks to Emily Babbitt for shooting the start of race one.

Matt Knowles is a relative newcomer to the DN fleet and he is showing lots of potential with a respectable third place. Chad Atkins broke out his new CSI hull sailed it to a very close second. T Thieler had enough luck to take the top spot.

For what it’s worth I started the day with a North FO-1 sail (shifty, light wind means good acceleration is more important than top end speed so the fuller sail is a better choice), my trusty 2008 CSI 4.1 mast and full length, 90 degree minimum width inserts.

In the first race I got a sweet gust off the line and was way ahead at the top mark but Atkins ground me down to finish about three feet ahead. I was about to complain to the Regatta Chair that the course was three feet too long but then I remembered that I’d set the marks. Damn. So I asked Atkins what he had on for runners. He said he was also using 90 degree minimum inserts. Of course I assumed he was lying and switched to a set of 95 degree inserts I have which seemed to grip OK but made a bit less noise in tacks and gybes.

They seemed to do the trick and the boat was a bit happier. Chris Miller said he had used a set of 100 degree inserts and they didn’t grip well and were very noisy…. I also concentrated on maintaining speed through maneuvers by sliding all the way forward in the cockpit during the turns- this gets weight off the aft runners (where all the friction is during the turn) and onto the front runner.

A major thanks once again to Steve Madden for finding and scouting the site, and big props to Jack Erikson for scoring most of the races. He was also first on site placing sand on the parking lot ice and the boat ramp. Steve advises Jack that “when you retire from Falmouth Marine I think there may be another career for you with the DPW!” Like he could ever pass a background check!

Steve also says: “I knew the pond was borderline small for a regatta and with the light and shifty wind I think just about all the acreage was used even into the coves!

I have to give lots of credit to the guys who had a difficult time completing all the laps. It was not an walk in the park. They hung in there and didn’t give up. Ken Olsen US4272 was elated when he managed to do all the laps in the last race.
Congratulations to Matt Knowles for his 3rd place finish. We will be looking forward to chasing him around in future races!”

Glad the season is off and running and thanks to everyone who showed up and made it happen! Great to see everyone out on the ice where we all belong. You know, away from the decent, normal, sensible people on dry land.

Stay tuned for the next bit of NEIYA news!

P.S. While this is a racing report, there was other action and people on Ashumet Sunday. Racing grabs the headlines but whether you race, want to race or cruise we think ice boating is just about the most fun you can have on a winter’s day. Want to participate reach out to us in the comment section.