This past weekend I was lucky enough to take a field trip down to NJ (although I didn’t feel all that lucky as I hit the road at 4AM Saturday morning) and see how the Jersey Ice Mafia lives.
Started the weekend by meeting up with Dave Clapp and Jim Hadley to take the SeaStreak ferry Dave runs out of Atlantic Highlands over to NY harbor to watch the America’s Cup World Series races.  The Ferry is a big, jet-driven catamaran that carries upwards of 200 people and sports a full bar and even catering on special days-  and still goes a cool 34 knots.  Dave drives it like a sportscar and I was amazed at how the crew treated him with respect and deference.  He clearly has them all fooled somehow.
The races were a bit of a wash (no breeze, only one demo race later in the day) due to lack of breeze but being iceboaters we took the poor conditions in stride.  The full buffet and open bar helped.
Then it was off to check out Doug MacFarland’s shop-  he is always working on something-  there was a freshly restored Chris Craft runabout in the driveway and an antique car in the shop along with some BIG runners underway for a stern-steerer, a video game machine with custom drink holder, and lots pieces of a Jersey Speed Skiff Doug used to race.  How it ended up in pieces is a whole other story…. 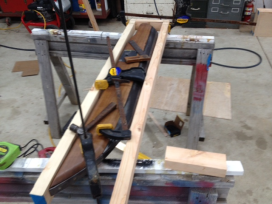 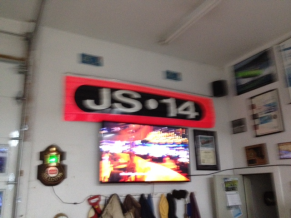 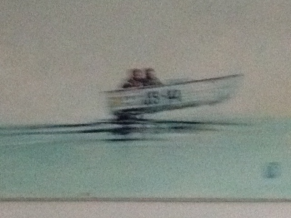 After that it was off to meet with Dan Vought at the North Shrewsbury Ice Boat and Yacht Club.  I’ve wanted to see this legendary place for years and to finally get in the door was a real treat-  first floor is a workshop with spars being varnished and two giant planks being worked on-  All kinds of cool pictures and memorabilia on the walls-  and it just smelled like a good old workshop (it ought to-  it’s been there since the late 1800’s).
Upstairs is another world-  of course there is a bar and a central meeting room with a table made from the cockpit of an old stern-steerer, trophies and cups all over the place, and more amazing old photos than you can count.  Stern-steerers, front steerers, lateen rigs, gaffers, Marconi rigs, skippers with no helmets, skippers with leather helmets, old photos, really old photos, and photos even older than those.   The America’s Cup passed through the area and left it’s mark-  one small photo of a J-Class yacht called ENDEAVOUR bears an autograph of her owner, Tom Sopwith.  Another photo shows C. Oliver Iselin conferring with Captain Charlie Barr aboard RELIANCE.  Just amazing. 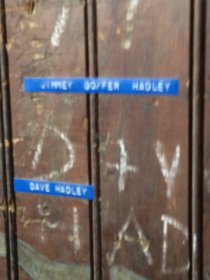 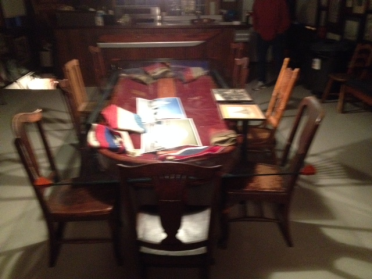 Of course Hadley, Clapp and Vought are proud of this club and were enthusiastic to say the least as they were showing me around-  Jim even showed me the locker in the shop that has been his since he was a little kid and was known as “Go-Fer.”  The stories were classics and the delivery was top-notch-  I could be polite and say these guys really know how to tell a story or I could be a little more honest and say the way these knuckleheads carry on has to be witnessed to be believed.  How any of them function in normal society is beyond me…
Of course I kid-  Have to thank the guys for hosting me and for the tour-  I had a blast!   If you haven’t seen this place figure out some way to get down there and have a look!  You’ll be glad you did-
The website will give you an idea but nothing will beat a real-life visit-  take a look here:    http://nsibyc.com/
T