Should have been there… 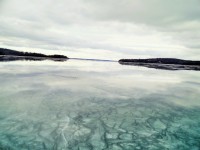 Ice wisdom says there is always thin ice someplace — but remember the corollary there is sailable ice out there as well.

Several sailors from the NEIYA, Long Island and a stray from the Hudson Valley, sailed Mallets Bay in Colchester, VT Sunday. They were stragglers from the abandoned New England Championships but walked off the ice knowing those that didn’t come missed out on a fine piece of ice.

Those fleeing the wet ice of Mallets were in transit to  the NA’s in Madison and passing through a new region of the mid-west “Equatorial Chicago”, with their AC blasting.

Back at Mallets condition briefings were given by area local experts Bob’s Dill and Schumacher and Paul Gervais. The plate was holding firm with only a
few scars.

Those that showed up were treated to large patches of glassy smooth slightly wet ice. The wind held till early afternoon than shut down when the sun began to show.

There is a moral of the story here. — Conditions are ever changing from good to bad and back again — You will never know from the couch.

There will be more ice this season. Some of us haven’t gotten out but i’m pretty sure it will be out there.

Good Luck to all the competitors at the NA’s, especially our home region favorites!